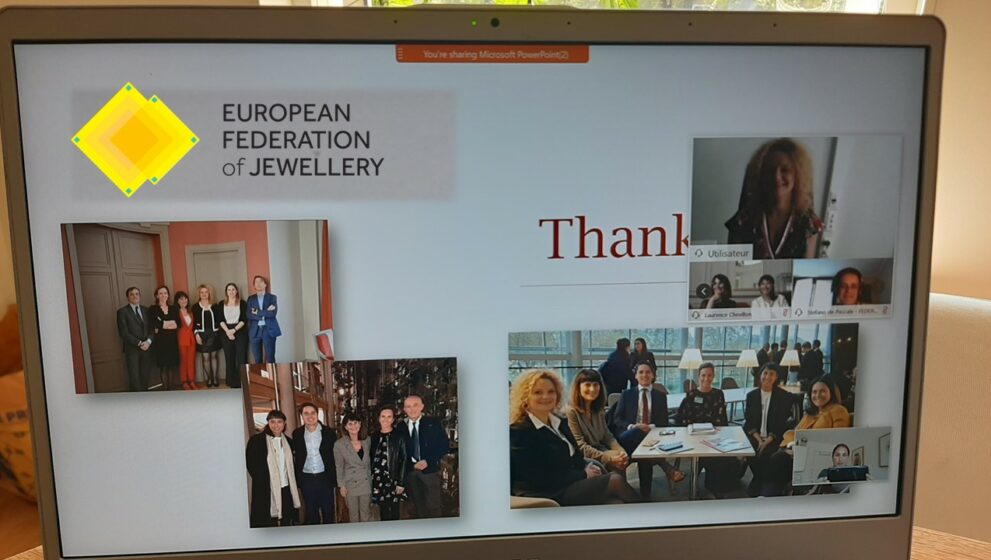 The General Assembly (GA) of the European Federation of Jewellery (EFJ) took place online on Wednesday 9 June, in order to respect the COVID-19 travel restrictions.

Various topics were on the table during this GA, notably the need for a harmonised cash payment ceiling at EU level. This ceiling would help to efficiently fight money laundering as well as to prevent market distortion and unfair competition. In this regard, the Federation had sent a letter to EU Commissioner McGuinness, who acknowledged the issue. Further meetings with EU policy makers have been held to ensure that this matter will be taken into account in the future Commission’s proposal on an EU Single Rulebook to fight money laundering.

Furthermore, the need for a clear diamond terminology and the future legislative proposal on mandatory due diligence will also remain priorities for the Federation in 2021.

The EFJ members praised the work of the Federation, active since 2013. They underlined the great internal collaboration, essential for the effective representation of the jewellery sector’s interests at European level.

For the first time, the General Assembly (GA) of the European Federation of Jewellery (EFJ) was held virtually on Wednesday, 24th of June in order to respect the sanitary restrictions put in place to protect public health during the Coronavirus pandemic. The GA was nevertheless an important opportunity to exchange on many important subjects for the European jewellery sector.

The COVID-19 crisis had a major impact on the sector as most of the ateliers and manufactures had to close, trade events and fairs were cancelled and an important number of jobs is at stake. Moreover, a lot of uncertainty remains about the second part of the year and it is feared that the recovery will not start before 2021, with severe consequences on the economic sustainability of the sector.

During the meeting, the EFJ members received updates about many important EU institutional files such as the recently adopted Action Plan against Money Laundering as well as the plans of the European Commission on due diligence and consumer protection. Their repercussions are of importance for EFJ and will be followed closely.

In light of these latest institutional developments, the EFJ members set the priorities for the future. The need for a clear terminology which differentiates between natural and laboratory-grown diamonds to strengthen consumer protection remains high on the agenda. Moreover, in the next months, the EFJ will contribute to the debate on an EU legislative initiative on mandatory due diligence and will advocate for a fair European ceiling for cash payments in business-to-consumer transactions.

The members insisted on the importance of the European Federation to represent their interest at the EU level and acknowledged that welcoming new members could reinforce the EFJ’s representative power.

The meeting proved to be an example of cooperation and fruitful exchange among partners who remain committed to defending the interests of the European jewellery sector at the EU level.

The General Assembly of the European Federation of Jewellery (EFJ) took place in the prestigious setting of the buildings of the French Union of Jewellery, Silverware, Stones and Pearls (UFBJOP) in Paris on the 1st of April. An exciting visit to the Haute École de Joaillerie (Higher School of Jewellery Arts) opened this day full of discussions. A few figures suffice to show the history and fame of the oldest jewellery establishment in the world: 151 years of existence, 600 students and 12 workshops.

Under the auspices of Bernadette Pinet Cuoq, President of the UFBJOP and EFJ, the discussions allowed for further reflection about the full application of the mutual recognition principle for European jewellery products. Such an application would significantly facilitate the free circulation of jewels throughout the European Union.

International trade was another topic. The EFJ reaffirmed the importance of maintaining an open European trade policy towards third countries and is currently working to identify the main tariff and non-tariff barriers that prevent the European jewellery sector from reaching 60% of consumers in the world.

2019 will also signify a year of change, as the European elections will substantially modify the political landscape. The EFJ will be equal to this challenge with the development of a new awareness and communication strategy. The members of the Federation will notably meet the newly elected Members of the European Parliament in October in Strasbourg.

At the dawn of the advent of a new European Parliament and a new Commission, the EFJ remains more mobilised than ever. “The European jewellery sector is faced with a growing number of challenges. We decided today to include the issue of synthetic diamond in our mandate. The EFJ will advocate for the implementation of a specific customs code to differentiate synthetic diamond from natural diamond.” concluded Ms. Pinet Cuoq.

The European Federation of Jewellery, created on November 2013, by representative trade associations of jewellery from France, Italy, Belgium and Portugal, adopted on February 6th its  priorities for action for the next months.

EFJ is in line with the jewellery industry expectations, who wished to strengthen its presence with the European institutions. Common issues are now coordinated into of concerted actions, at the level technical and also at the political level of the European Union.

The General Assembly was the occasion to make a review of activities conducted during 2016: launching of the EFJ website http://efjewellery.eu/, event organized in Brussels on November 8th, chaired by MEP Tokia Saïfi, Vice-Chair of the European Parliament Committee on International Trade, in order to introduce the association and the best practices of the European jewellery sector. The audience was composed of Members of the European Parliament, representatives of the European Commission and the Member States, as well as relevant stakeholder. Main issues for the sector were exchanged such as conflict minerals, limits for cash payments and Made in.

The great success of this event will be followed by many actions in 2017, like bilateral meetings with European policy makers, in order to raise awareness about the jewellery sector, exchange views about best practices and spread knowledge about jewellery so as to improve discussions impacting the activities. In 2017, in order strengthen its role, new members will be invited to join the association.